La Soufflerie is a non-profit glass blowing organization created by wife and husband team, Valentina and Sébastien Nobile. Though they started out with vases, they now produce a full range of glassware along with plaster, terracotta pieces, and candles.

Sébastien is a mold maker and he has applied his savoir-faire of mold making and sculpture into glassblowing. He has his own company called Moulage et Patine and creates beautiful plaster pieces for museums, boutiques, hotels, and private clients. He also teaches at Les Beaux-Arts de Paris!

Valentina, an Italian-American, grew up in Paris. She went to NYU Art School to become a painter. She then divided her time between Milan and Paris and worked for 10 years as an independent artist.

Sébastien and Valentina find inspiration from classic designs, everyday objects, and also from people in their lives. Many of the pieces are named after family members, friends, clients, and co-workers. Thibaut and Chiara are named after their children. Anjeanette and Sandra are named after our Community Manager and Studio Manager. We like to keep it all in the family because family is what means the most to us! 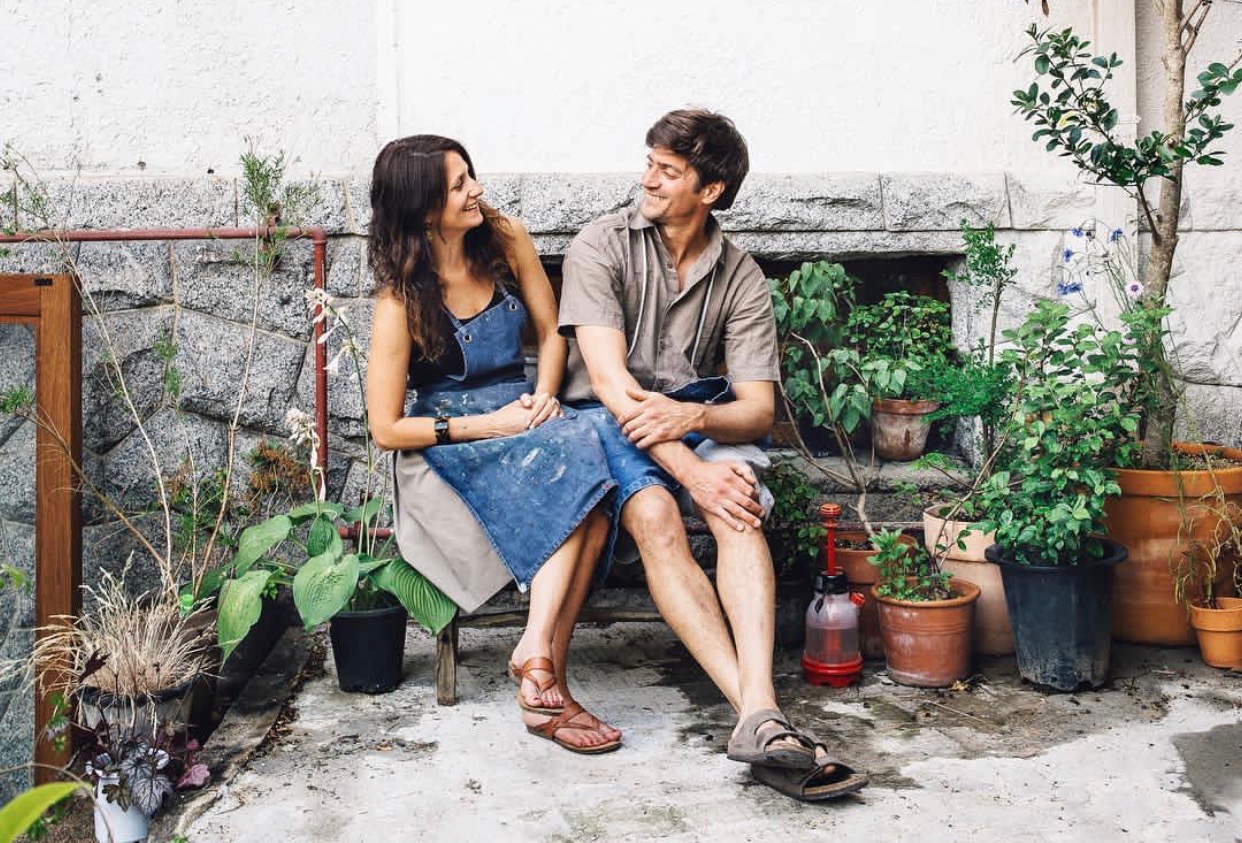 Sébastien had been dabbling in the art of glassblowing when he realized that 100% mouth-blown glass (no machines!) was a dying art. At the time there were fewer than five professional glassblowers in the Paris region.  Upon learning this, Valentina and Sébastien decided to start La Soufflerie, a non-profit organization that gives all its proceeds back to the glassblowers to keep the art alive. They started in 2007 by creating 4 vases from recycled glass, loading them on the back of their bikes, and riding around Paris to sell them to flower shops. They sold out in a day and received lots of feedback as to what kind of vases customers needed. Sébastien would then go back to the glass blowing studio in the 18th arrondissement to create these designs. Then it was back on the bike with a trolley attached to deliver the finished products. And this is how the story began…. 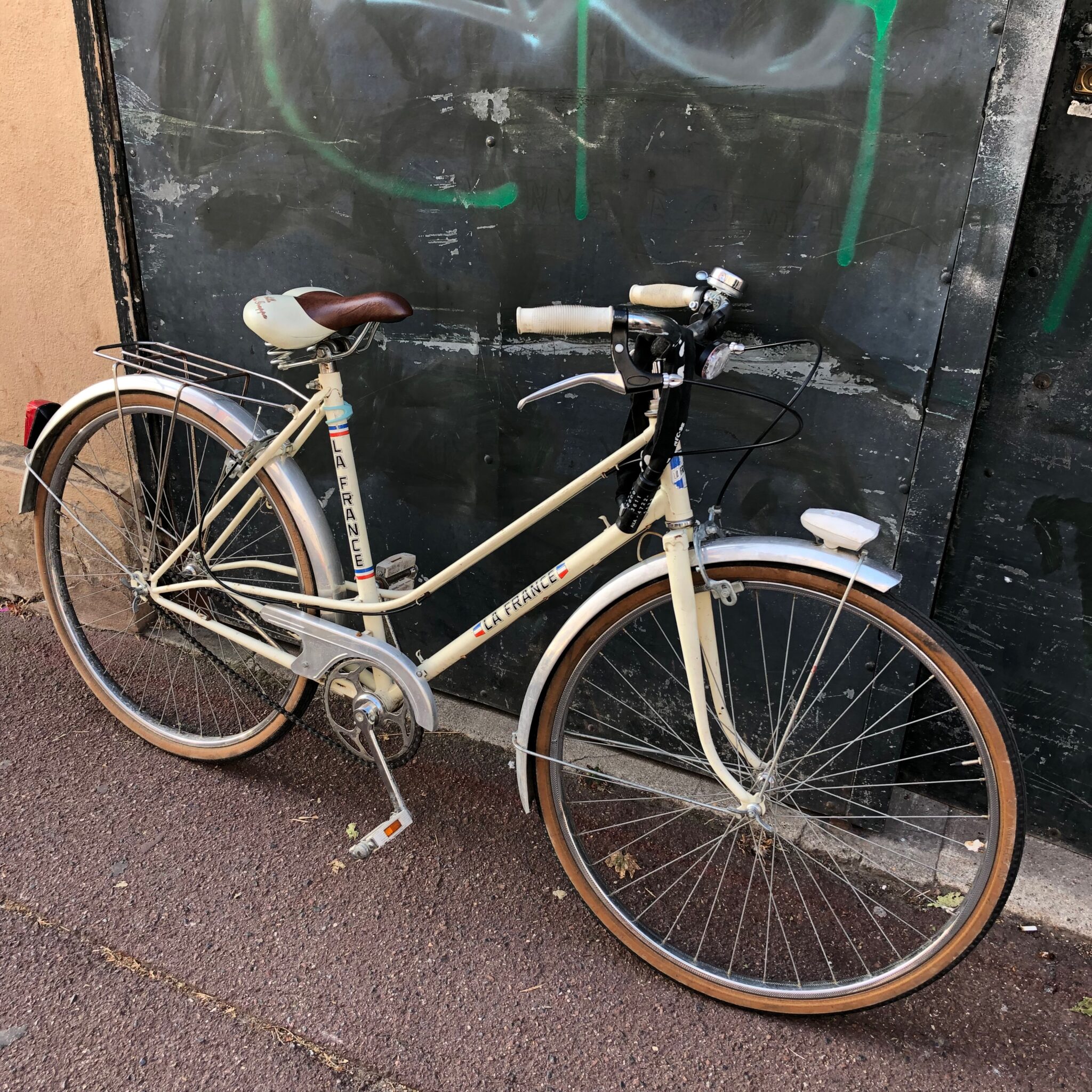 When we receive your order, the preparation process begins! Each piece is inspected to make sure it is up to our high standards, then every glass piece is hand washed and dried to be prepared for packaging. We use as much recyclable materials as possible for your order.

We even include our neighbors in the recycling process! Every morning Sebastien gets his coffee at the local café while having a short chat with the café owner. The owner gives Sebastien “yesterday’s” newspaper that he brings back to the studio to use for our packaging. Our other neighbors also drop off their newspapers on our doorstep to re-use. This is why you may find some french news articles in your box!

Our products are also wrapped in recycled craft paper for protection. When our boxes get old, we cut them up into small strips & squares to use as packaging materials between each piece for extra protection instead of bubble wrap.

We also use a wood wool from Fibrene de Touraine. It is an ecological packaging that is 100% natural protection for fragile objects. The wood curls prevent impact & vibrations.

We normally abstain from using bubble wrap but some of our more delicate pieces require it in order to get to you as safely as possible.

We ship all over the world. Shipping rates are applied at checkout; add the products that you are interested in to your cart and enter the shipping destination to view your shipping costs.

Please refer to our Terms & Conditions for more information. CARING FOR YOUR LA SOUFFLERIE PIECES

We create timeless and durable pieces that are made to last and bring beauty into your home. Our vessels are meant to be used everyday.

We do recommend handwashing as much as possible to avoid scratches from the dishwasher and to keep the glass sparkling. But, know that our glassware is dishwasher resistant and can be cleaned in the dishwasher. All plaster and terracotta pieces are not suitable for use with water. You can dust each piece with a dry cloth.

Before lighting your candle, trim the wick to about 1/2-cm in length. This allows the candle to burn more slowly and also avoid unsightly black smoke marks around the edge of the glass. Every time you burn your La Soufflerie candle, allow it to burn at least until the whole top of the candle is liquid. This will help your candle burn more evenly for each burning session. After blowing out your candle, re-center and straighten the wick.

When using your candlestick holder, do not let the flame touch the glass. Blow the candle out once it gets close to the candle stick holder. Do not place your candle on a cool surface like marble. If the bottom of the hot candle comes in contact with a cold material, the glass may crack. Do not burn your candle all the way down. Leave at least 1/2-cm of wax in the container to avoid cracking the bottom.

Once you have finished burning your candle, hand wash with warm water and soap until the dried wax melts away. You now have a new La Soufflerie piece to use!

Pigmented glass is mixed into the furnace during the glassblowing. This means that the glass itself is colored instead of painted. The glass is durable and no changes or fading occur with continued use over time.

We use cookies on our website to give you the most relevant experience by remembering your preferences and repeat visits. By clicking “Accept”, you consent to the use of ALL the cookies.
Cookie SettingsAccept AllReject All
Manage consent

This website uses cookies to improve your experience while you navigate through the website. Out of these, the cookies that are categorized as necessary are stored on your browser as they are essential for the working of basic functionalities of the website. We also use third-party cookies that help us analyze and understand how you use this website. These cookies will be stored in your browser only with your consent. You also have the option to opt-out of these cookies. But opting out of some of these cookies may affect your browsing experience.
Necessary Always Enabled

Analytical cookies are used to understand how visitors interact with the website. These cookies help provide information on metrics the number of visitors, bounce rate, traffic source, etc.

Advertisement cookies are used to provide visitors with relevant ads and marketing campaigns. These cookies track visitors across websites and collect information to provide customized ads.

Other uncategorized cookies are those that are being analyzed and have not been classified into a category as yet.

SAVE & ACCEPT
Powered by